Accueil Grotius International Afghanistan : “there must be no dirty deals that sacrifice humans rights...

All that I can remember from my childhood in Afghanistan is war. I was four years old when the Communist coup d’etat happened in April 1978. We lived in Herat city in western Afghanistan, where my father was a high level official. For the first time Afghans heard gunshots, heavy artillery and jet fighters. My family and I were terrified, crying and screaming. We didn’t know what was happening or what we should do.

All I can remember since then is fighting and bloodshed. And it was always ordinary people who paid the price of war.

During nearly twenty years of civil war I witnessed heavy and constant shelling of civilian areas. I lost my 14 year old brother, an intelligent student who had hoped to become a medical doctor. He was killed as a result of a rocket attack which hit our home.

I left Afghanistan in 1996 when the Taliban began implementing Sharia law. Women were beaten for leaving their homes and men were beaten simply for trimming their beards or wearing jeans. Daily life in Afghanistan consisted of routine and grotesque public punishment. Kabul’s main stadium was called the slaughter house because every Friday the Taliban brought people to the stadium to be punished. Punishment meant amputation or death.

In 2002, after the Taliban regime collapsed, I returned to Afghanistan and started working for Amnesty International in Kabul.  Back then, there was a huge amount of hope for Afghanistan’s future; girls were able to go to school, women were able to work, and men and boys walked the streets without fear of being beaten for wearing jeans or shaving their beards. In June of that year, hopes were high when the UN Secretary General Representative in Afghanistan, Mr. Lakhdar Ibrahimi, called an emergency Loya Jirga (grand council) to establish Afghanistan’s transitional government.

But Mr Ibrahimi let the Afghan people down. Responding to the people’s call for accountability for past human rights violations he declared “we cannot sacrifice peace for justice”; and opened the gate for power sharing with warlords and other human rights perpetrators who had abused thousands of Afghans from the time of Jihad in the 1980s right up to the civil war in 1990s. Many Afghans, seeing their abusers becoming more powerful and offered government positions, felt betrayed by the international community and United Nations.

Afghanistan‘s security situation was relatively calm after the collapse of Taliban regime in December 2001. But by 2005 things had begun to deteriorate.

What triggered the instability we see in Afghanistan today? The answer is simple: the fact that the Afghan government and international community have failed to deliver justice to the people of Afghanistan. Not only have they ignored the calls to bring human rights abusers to justice but they have empowered them through offering government positions such as governorships, police chiefs and army chiefs. Many Afghans who supported the international military intervention in Afghanistan and the new Afghan government have now turned their back on both. There are Afghans who suffered human rights abuses who now wish only for revenge.

In February 2007, the Afghan parliament passed a bill giving amnesty to war criminals and human rights perpetrators. This move was counter to the Afghan government’s commitment to a Transitional Justice Action Plan agreed at a conference in London 2006, alongside ratification of the International Criminal Court (ICC) which Afghanistan has been a party to since 2003.

I organized the first war victims and survivor’s demonstration against the bill. More than 400 war victims and survivors marched the streets of Kabul, protesting in front of the Afghanistan Independent Human Rights Commission (AIHRC), United Nations Assistant Mission for Afghanistan (UNAMA) and President’s office. The demonstrators held banners saying “no-one has the right to give amnesty to war criminals even you, Mr. President” and held photos of their loved ones who were killed or disappeared during Afghanistan’s long years of war.

In December 2007 I took four war victims to a meeting with the Afghan president, where the media was also present. The war victims told their stories and experiences of war in an effort to block the amnesty bill. Afghanistan’s president wept but said that he was impotent; that he is too vulnerable to deliver justice to the Afghan people.

Ten years since the fall of the Taliban there have undeniably been many achievements. Among others, there has been a flourishing of hundreds of independent media, including TV channels which were banned under Taliban rule. More than seven million children attend school of which 35- 38% are girls. Women make up 28% of the Afghan parliament and the new constitution enshrines gender equality in law. Many private banks and telecommunication companies now operate in Afghanistan, creating jobs for Afghans.

But Afghans are concerned about their uncertain future, particularly women. In January 2010 an international conference on Afghanistan was held in London to discuss peace talks with the Taliban. The communiqué of the London Conference stated that the Afghan government will negotiate peace with the moderate Taliban – those who denounce violence and break ties with Al-Qaeda and accept Afghanistan’s constitution which includes respect for women rights.

But none of this is happening. A High Peace Council was established in October 2010 by President Hamid Karzai to begin peace talks, but of 70 council members only nine are women, and most of these were hand-picked by the President. Meanwhile most of the Taliban ‘peace talks’ are happening behind closed doors and there is zero participation from significant members of civil society, including human rights groups and women’s rights organizations. No one knows what the government is prepared to sacrifice – or what red-lines will be crossed – in the course of negotiating with the Taliban.

Why are Afghans, particularly women, so concerned? Afghans have experienced Taliban rule once before, and have experienced its brutality and lack of respect for human rights. The Taliban still has the worst human rights record of any group in Afghanistan. Amnesty International has called on the International Criminal Court (ICC) to investigate war crimes committed by all parties to the conflict in Afghanistan, but particularly the Taliban.

At the forefront of concerns is that if the Taliban were to return to any position of power it would be very easy to amend the Afghanistan constitution, and therefore lose many hard won gains including women rights, freedom of expression, political participation of women and an independent media.

The international community must remember the promises made in 2001 to protect and safeguard human rights – especially women’s rights – in Afghanistan. There must be no dirty deals that sacrifice human rights in favour of a peace settlement. 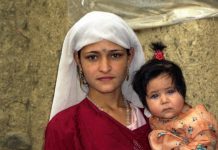