Accueil Enjeux humanitaires Santé internationale From development to Emergency : the evident and hidden consequences of the...

Since 2009, ACF has been operating in the 2 districts of Moyamba and Freetown/Western Area implementing health and nutrition, food security and Water Sanitation and Hygiene (WaSH) programmes. In strong collaboration with the local and national authorities, ACF has been focusing on prevention and treatment of acute malnutrition by addressing the direct and underlying causes of malnutrition (food insecurity, difficult livelihoods and poor access to water and sanitation), and on prevention and response to emergency (cholera in 2012). It is within this last area of work that ACF has been responding to the recent Ebola outbreak that started in West Africa in March 2014 and was officially declared in Sierra Leone in May.

Despite the outbreak, ACF was able to continue implementing the country programmes on nutrition, food security and WaSH in the two districts of operation initially not hit by the epidemic. Nevertheless, due to the deterioration of the situation, and the restrictions imposed by the Government following the declaration of the State of Public Emergency by His Excellency President Koroma in an effort to contain the spread of the disease, ACF has been obliged to revise the implementation of some of the activities to allow continued operation and relevance of the activities, as well as avoid any risk of infection for ACF staff or beneficiaries as a result of field activities.

With regards to the nutrition programme, the supervision and monitoring system at health facility level had to be revised to take into account the increased risk. Further, the activities conducted at community level, in collaboration with the community health workers (CHWs), for the detection and referral of malnourished children had to be adapted to comply with the “no body contact” policy adopted by the MoHS that prevents the CHWs conducting active screening for malnutrition by measuring the middle-upper arm circumference (MUAC) (1) of children under 5.

To cope with this decision, ACF is to support the MoHS and UNICEF in rolling out an emergency intervention that will see a MUAC tape being provided to every mother in Sierra Leone (1 tape per children) to ensure that, under proper supervision by CHWs and NGOs staff, mothers monitor the nutrition status of their children reducing the risk of an increase in the malnutrition rates in the country.

In all community level work, both the nutrition and WaSH teams had to adapt the activities usually implemented to improve awareness on infant and young child feeding practice and on hygiene practices, to fit in the new context and to respect the measures adopted by the President to contain the spread of the disease. In order to do this, ACF has reduced the number of people involved in each community session to a maximum of 20, and integrated Ebola related messages on the daily activities by increasing awareness on Ebola signs and symptoms, the way of transmission, the measures to prevent it and the referral system in place in the country.

The governmental decision to delay the reopening of the schools following the summer break to avoid further contamination resulted in the suspension of the hygiene promotion activities in the schools where ACF was implementing the WaSH in school projects, aiming at improving hygiene practices as well as access to clean water and latrines. Despite this, ACF has been instead able to continue the rehabilitation and construction of wells, boreholes latrines and urinals in communities, health facilities and schools, improving the access to clean water and sanitation in Freetown-Western Area and in Moyamba.

Since the beginning of the crisis, in collaboration with the local authorities and international agencies, ACF has continued to scale up the activities for the Ebola response to actively and effectively respond to the outbreak by targeting the most at risk groups and communities. Thus, ACF has conducted awareness raising sessions, supported trainings for volunteers and health workers involved in the response and provided the District Management Teams in Freetown and Moyamba with consumables (i.e. chlorine and soap) and protective equipment (gloves, masks, apron, etc.) useful to prevent the transmission of the virus while providing health services to the communities.

ACF has also supported limiting the transmission of the virus at community level by coupling the hygiene promotion and sensitization sessions on Ebola with provision of hygiene kits for the targeted communities and groups. Since June, ACF has reached more than 50,000 people during social mobilization activities and trained more than 1,600 Community Health Workers and over 400 health staff on how to detect and refer suspected Ebola patients.

ACF is going to continue implementing social mobilization activities in Moyamba, Freetown and Kambia aiming at adapting the communities’ behaviours to the current context ensuring that communities are not only aware that Ebola exists in the country but are also capable and willing to transform their knowledge in attitudes and practices to break the human-to-human EVD transmission (a recent Knowledge Attitude Practice – KAP – survey conducted nationwide confirms that 99% of the population believes that the virus is real).

Further, in consideration of the increasing needs that case management activities (surveillance, treatment, burial) are revealing, ACF was able to provide access to water and improved sanitation in the Moyamba Ebola holding centre and is going to support the MoHS with the WaSH set-up of the Ebola Community Care Centres in Moyamba and Kambia districts. Yet, ACF is supporting the District Health Management Team (DHMT, the MoHS district structure) in Moyamba in the conduction of surveillance and burial activities in the district through the provision of consumables and logistical support.

Ebola, the silent emergency and the hidden consequences

Despite the always increasing commitment ACF has in responding to the direct causes and impacts of the EVD outbreak, the organization is also working toward reducing the indirect impacts the epidemic is having on the population. Indeed, along with the Ebola outbreak there is a parallel on-going silent emergency that is striking the improvements that the health, socio and economic sectors have achieved since the end of the war in 2003.

The already fragile health system in the country is not capable of providing adequate and sufficient basic health care services particularly, but not only, for pregnant and lactating women and children under 5 years. This will potentially entail an increase in morbidity and mortality of children under 5 from other diseases than Ebola and a further loss of trust by the communities that have already reduced their attendance to the health facilities, towards the health system.

In the PHUs where ACF works in Freetown, the organization has reported a 66% decline in the number of malnourished children admitted in the nutritional programmes between June and September and a 90% decline is reported for the stabilization centres where severely acute malnourished children with complications are referred. These numbers are linked to a decrease in trust the communities have in the health systems, to an increase in the fears by health workers in providing basic health services, to the shortages in the drugs as well as the temporary closure of health facilities where suspected or confirmed cases were admitted without preventive measures or due to the absence of the health staff.

In order to prevent an increase in deaths from other diseases than Ebola, ACF (in consortium with 8 other NGOs that aims to cover the whole country) is implementing health and WaSH activities in Moyamba district to improve the capacities of the health staff in peripheral health units (PHUs) and community health centres (CHCs) to prevent and control potential Ebola infections at health facility level. ACF is implementing training and monitoring activities on the “infection, prevention, control” (IPC) measures, supporting 10 Community Health Centres (CHCs) in providing communities with the basic package of essential health services (BPEHS), and improving the access of the facilities to clean water and sanitation enabling PHUs and CHCs to operate in the framework of the IPC measures, improving the provision of basic health services and reducing the risk of maternal and child deaths.

Along with the silent emergency regarding the health sector, the outbreak and the measures adopted by the Government to contain the spread of the disease are impacting on the food security of the population. A recent rapid assessment conducted by ACF, FAO and other development partners shows that accessibility and affordability to food is rapidly decreasing due to low availability and increases in prices. The limitation in the farming activities and in the access to markets at district level as most of them have been closed is limiting the availability and accessibility of food for the majority of the population. A recent study conducted by ACF in collaboration with the University of Naples “Federico II” (2) on the impact the Ebola outbreak has on food security, forecasts the increase in the number of people exposed to undernourishment in Sierra Leone in 2015 to, an average of 1.65 million.

As part of the programmes in Sierra Leone, ACF has been implementing a food security/livelihood project at health facility level by providing health staff and community caretakers with the tools and the training to grow vegetable gardens at PHU level. Due to the Ebola outbreak and the community fear of attending PHUs where vegetable gardens are established and managed, ACF had eventually to adapt the project to respond to the immediate need of the population by providing mothers and caretakers at community level with seeds and tools to grow vegetable gardens at community level by improving, in the short and long term their food security and livelihood. Aiming at ensuring that adequate response to the food insecurity of the population is addressed ACF is continuing to monitor the prices and the needs at community level to be able to respond properly.

In conclusion, the current focus of donors and international agencies in the fight against Ebola is on case management with the attempt to rapidly increase the bed capacities in the country. However the country is still facing an increasing rate of human-to-human transmission at community level mainly due to the continuation of funeral rituals being carried out at community level and communities fear of seeking healthcare at the health facilities. After six months from the beginning of the crisis, Sierra Leone is officially counting almost 4000 confirmed cases with an average of 60 people per day.

Despite the clear need for the international community to continue increasing and improving the case management capacities in terms of available beds, this action has to be coupled with a rapid, effective and coordinated increase in the logistical support (requiring among other items: ambulances, cars, staff for burial teams, surveillance) – and more in general with a more coordinated response – and an increased involvement of the communities in the Ebola emergency response by improving their ownership. Further, the international community should not forget to ensure that the silent crises that the Ebola outbreak has highlighted are not underestimated and forgotten.

The development of this crisis has demonstrated that treatment alone will not break the transmission cycle, and that taking a short sighted view of the effect that the Ebola outbreak is having on the overall systems on which the state is built will have long lasting impacts that need to be anticipated, prevented and addressed immediately with an effective, coordinated and comprehensive response that aims at responding to the immediate needs and adapting the response to the changing context ensuring that there is a link between relief, rehabilitation and development.

Isotta Pivato is the Advocacy Expert for ACF in Sierra Leone. Since the beginning of the Ebola epidemic in West Africa she’s been actively engaged in the emergency response within the
organization and by supporting the Ministry of Health and Sanitation and UNICEF within the Social Mobilization-communication pillar at national and district level.

ACF reflections on the WHS 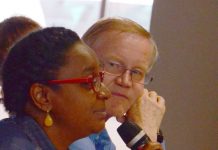