Since 2005’s French riots, suburbs, and more recently and surprisingly, some outskirts of downtowns, are still complex issues in which the comprehension and the support of the “suburbs” phenomenon have to be considered as systemic. But, the weakness of the “suburbs plans” which have been setting up by successive governments for many years denies this reality. Because of a lack of motivation and means. Because politicians don’t want to face the gray reality giving a lot of dark thoughts.

The use of machine gunners AK 47(Kalashnikov) by small gangsters in Marseille, was given a lot of media coverage last weeks, above all because it ended with the death of a policeman and a 17 years old boy. These weapons of war are within everyone’s pocket (about hundreds of euros) and used in town, just for hold-ups which brought few money…these weapons coming from most of eastern Europe’s arms stockpiles have probably being used in some African and Balkan wars. They have been exchanged in Mafia traffic of drugs coming from Spain and Maghreb which had the cash but not the weapons. This complementarity did worked and is spreading today in some suburbs of our country, becoming new socio-economical gray areas or even political gray areas too.

The authorities’ response was very quick because policemen of Marseille’s anti-crime squad were equipped with pump-action shotguns. To answer force with force is reassuring for people in short term but limits are quickly reached and this method may, in some cases, create a stirring up effect of conflicts. The simplicity or we could say, the linearity of the policy response when there is such violence still stays unsuitable because it doesn’t take into consideration the new factors involved (sociological, economic, cultural and political).

These peripheral zones of our urban centres seem to be in the dark which make their comprehension much more difficult. Views are worth all realities. The reason why politicians want a militarization of the police response in these districts is the fact that they see these areas as “conflict zones” or gray areas at least. Gray areas and dark thoughts.

The recurrence of burglaries with Kalashnikov and the predominance of political and police response illustrate two worrying phenomena. Indeed, the militarization of trivial events now echoes the use of military actions in everyday life. Is it appropriate to assimilate a robbery as a war action? Today, the political and police response is questionable, especially because it combines a reduction in the numbers of police officers, making private security much more powerful and an arm race between “cops” and “gangsters” and we know, by experience, the vicious circle result. The BAC (anti-crime squad)’s role in suburbs has been recently studied by Didier Fassin who concludes that its actions contribute to enhance violence instead of being a mean of regulation or extinction. In a sociological viewpoint, we could put forward that these police methods permit to comfort the roles and functions of  “cops” and “gangsters” .

Definition and understanding of gray areas

The globalization process overspreading in our times triggered a progressive change of symbolic and real boundaries defined by populations and social groups. There are not local or global issues anymore but a combination of both, a “glocal”, which shook up and blurred lines, underlining the interdependence result. Lack of job security, unemployment, social stigmatization (social class phenomenon is also a reality in western world even if it’s not displayed), the difficult access to healthcare and housing, traffics and criminal businesses in connection (prostitution, drugs, weapons,…)or international criminal businesses. The recipes are the same everywhere: in the Courneuve, the New York’s ghettos or in Calcutta’s slums .Only their rates and their local practices are different. Are there obviously defined as gray areas?

Three criteria allow to define the hybrid and moving space called “gray area”: A competition of authority, a social deregulation and a privatization of the territory. Like some areas as Chad, Afghanistan or Somalia, French suburbs also became gray areas. The competition of authority with the police but also with civil authorities is undeniable and the conquest of new territories by some groups follows the recovery of lost territories by the others. These French gray areas are above all areas of social pathologies, in which the construction of identities is not in line with society anymore. This phenomenon may lead to a kind of separatism between government and citizens. This social deregulation is completed by a privatization of the territory in which gangsters define and share their sphere of influence and control. But this privatization of disorder also echoes a progressive privatization of the order which is not reassuring. Gray areas and dark thoughts.

In this liquid world in which answering with violence on these pockets of violence only contribute to move and reinforce it, “the software has to be changed” and the political short term responses influenced by electoral ambitions have to be stopped. The semantic and operational militarization of the actual political response seems to be doomed to failure. Conceived as a pacification strategy on a conflict zone, it doesn’t solve the real problem and none of social conflicts has ever been resolved with weapons. To deal with traffic and incivilities problems, it’s necessary to have a police response instead of a militia action. Plus, it’s necessary to respond to the social issue of suburbs: the problem of the stigmatization in the hiring process and the overdetermined unemployment, the difficult access to healthcare because of the insecurity noticed by emergency rescue teams but also because of financial and linguistic barriers. The transformation of some French suburbs into gray areas is neither a fatality nor an easy task. It’s the glocal product of globalization and the gaps created by this phenomenon. Indeed, these gray areas are a social and historic construction and it’s important to keep that in mind. It’s a political and social challenge because if the situation doesn’t change, there would be more and more violence.

The experience of the “failed states” shows that these real and scattered gray areas have been very often the first step of dangerous conflict situations (national conflicts most of the time). Anticipating these evolutions would have been easier than controlling them after the resolution of a conflict.

What is the connection with humanitarian actions? Everything, of course. When aid workers go to conflict zones, they often work in gray areas or in failed states and their insecurity is very high. They are faced with socio-economic precariousness, the difficult access of healthcare and housing, but also the local traffic (with some international branches) and the public and private coercion forces (police, soldiers). They are also faced with identity conflicts based on ethnic and races (often manipulated by different actors) and conflicts about territories (to monopolize a natural resource or a strategic situation) and they have to analyze them to adapt themselves to the different situations.

The comprehension of these gray areas (here and over there), the actors and their actions, is a citizen need. It concerns humanitarian workers, legitimate expressions of civil society, but also each of us. Some solutions are possible but it’s necessary to invest resources and a political involvement is especially required. Associations and municipalities really get involved in the reestablishment of social ties and in the mediation of local conflicts. In spite of that, there is a lack of confidence in words and actions of government because of the incoherence and some missed opportunities. Yet, traffics are a reality and socio-economic discrimination too, disturbing the daily life of the inhabitants.

Not naive worldliness or demonization “karchérisé”. Just the reality, reality just. The worst hypothesis, discussed in some places, would be that these gray areas affected by socio-economic problems turned into politico-cultural ones. The socio-political gap would be very difficult to close and could be the roots of more dangerous and violent conflicts. Through the social conflict of our suburbs are emerging armed conflicts. Gray areas and dark thoughts. 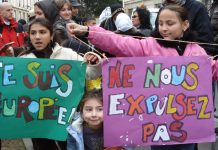