Accueil Grotius International Elections and the Media in Post-Conflict Africa: Votes and Voices for Peace?... 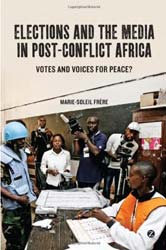 Over the past ten years, the Democratic Republic of Congo, Burundi, Chad, Central African Republic, Congo Brazzaville and Rwanda all organized pluralist elections in a post conflict context, having experienced an armed conflict which either interrupted or prevented democratization processes.

These polls were organized with the support of the international community, which viewed them as a crucial step in the peace-building process. The local media’s role throughout has been to ensure that an electoral process is actually ‘free and fair’ – a role that becomes even more crucial in countries where the media have previously being perceived as warmongers or peace-builders in the conflicts. Giving a voice to African journalists and analysing the work they have been publishing or broadcasting during these elections, African media specialist Marie-Soleil Frere explores if and how the local media fulfilled their duties. In doing so, the book reveals journalists’ professionalism at a time when much is expected from the media, as well as the intense political pressure faced that can make their work particularly difficult. Insightful and comprehensive, Elections and the Media in Post-Conflict Africa underlines both the importance and the fragility of the role of the media in a democratic system.

About the Author: Marie-Soleil Frère is Research Associate at the National Fund for Scientific Research and teaches Journalism at the University of Brussels where she is also the Director of the Research Centre in Information and Communication (ReSIC). Her work explores the relationship between media and politics in Sub-Saharan Africa. She worked previously as a teaching assistant at the University of Ouagadougou (Burkina Faso), and as a Program Officer supervising media support projects at the International Organization of the Francophonie in Paris. She has published The Media and Conflicts in Central Africa, Presse et démocratie en Afrique francophone and Médias et Communications sociales au Burkina Faso. She is also an Associate Expert at the Panos Institute in Paris, for which she supervises the publication of training manuals and studies for media practitioners in Africa.